The property came into being in the 19th century following the marriage of Guillaume Rousseau, owner of Domaine Frêche and Marie Bert, owner of the Domaine de Sipian. Both these properties in the Medoc appellation were cited in the 1839 Féret.

After the marriage the two properties were joined together under the name of Château Sipian, name also given to the renaissance style château built in 1850 by the Rousseau family. At that time production was around 100 to 150 barrels per annum.

An extract from the 10th edition of Féret’s Bordeaux et ses Vins in 1929 recounts : “Constructed on the plans of Mr. Bonorre, the chateau dominates a huge property which covers every kind of culture undertaken in the Médoc. It produces on its clayey-gravel slopes a wine that is highly esteemed by the trade; in the areas of alluvial deposits wheat and hay of the finest quality; in the sandy areas, pine and locust trees. The vineyard of around 40 hectares has for many years been regularly planted with the best grape varieties, meticulously renewed.; the installation of the cellars, vat room and other outbuildings has been well designed for good vinification, economy of energy and surveillance.”

Between 1920 and 1947 two owners succeeded each other and in 1947 the chateau and surrounding vineyard were sold.

From 1947 until 1989, period during which the Château belonged consecutively to the Compagnie Française de Matériel des Chemins de Fer and the Marcel Dassault company, the viti-vinicultural activity was interrupted and the buildings were used as a holiday centre.

At the end of the 1980’s, the Château was acquired by a couple who decided to renew the tradition of producing wine. Having purchased several parcels of old vines and planted some new parcels in the grounds of the Château, production began again. This renewal of the activity imposed the adoption of a new name, the original name having been lost due to the interruption of production. This then is the origin of the name Château Rousseau de Sipian, with its reference to the name of the Rousseau family who built the Château and to the former name of the Domaine de Sipian.

The vini-viticultural activity continued and in October 2000, Christopher Racey and his father Roy, both passionate wine-lovers, acquired the Château and began extensive modernisation work in the cellars and in the vineyard. Their efforts were regularly rewarded with medals attributed to wine contests in Paris and Bordeaux, without forgerting the "Reconnaissance Cru Bourgeois" since the 2008 vintage. 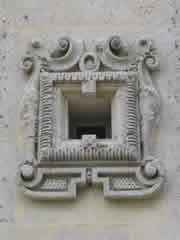